AML is an aggressive hematologic disorder ultimately leading to fatalities in approximately 80% of the patients. Other than the physiological symptoms, patients with AML have shown impediments of differentiation and proliferation of blood stem cells leading to apoptosis, i.e. undesired cell death.  Numerous published studies have indicated that the impediments include critical protein syntheses for differentiation and proliferation.  Therefore, it can be concluded that the cause of AML is at the genetic level, the abnormal or lack of normal expression at the DNA and/or RNA level in the cellular processes. Phorbol esters, including our proprietary RP-323 induce a broad spectrum of cellular effects including differentiation and proliferation (cell division) of hematopoietic cell lines.

Base on the above scientific evidence, PhorMed Inc. initiated and completed a Phase I clinical trial in the US using our proprietary phorbol ester, RP-323, with patients diagnosed with hematological malignancies. Together with a positive indication of the efficacy of RP-323 in differentiation and proliferation, the safety profile of treatment with RP-323 showed only transient short term side effects.

RP-323 is therefore a candidate for the treatment of acute myeloid leukemia.

How it Works in AML

The activity of RP-323 as a differentiating agent has been established by studies of HL-60 human promyelocytic cells and primary human leukemia cells obtained from patients. RP-323 induces a broad spectrum of biologic effects that provide a basis for its useful in AML. At the cellular level, many of these effects may be mediated by protein kinase C. Protein kinase C is a family of phospholipid and calcium dependent isozymes that are activated by diacylglycerol. RP-323 is able to activate protein kinase C in the absence of diacylglycerol. The targets of phosphorylation results in the activation of several processes involved in cellular differentiation, clearing the pathway along the full GM-CFS pathways from stem cell to white blood cell (see figure 1); proliferation and cytokine induction, working at multiple points to clear pathways and boost immune responses (see figure 2); mitogenesis; neurotransmission; hormone secretion; and/or can result in apoptosis, the death of cells (see figure 3). Two well characterized transcription activation/repression pathways regulated by NF-kB and AP-1 transcription complexes appear to be regulated by protein kinase C.

Basis for the Clinical Use of TPA to Treat Hodgkins Lymphoma.
Genetic mutation of one of the white blood cells, the B-lymphocytes, leads to the formation of Hodgkin’s Lymphoma across the gender and age groups. Current chemotherapy with one drug or in combination of drugs with or without radiotherapy has been used in the treatment of this disease. The efficacy however differs from patient to patient due to individual difference in the basic health conditions including age. Because of this individual difference, side effects of currently used medications are at variance in severity.  In other words, the tumor may be cured but the patient’s response, i.e. side effects, to the medications may not be beneficial to the general physiological health of the patient. Therefore, a target oriented therapy with tolerable side effects is the preferred venue.

PhorMed, Inc. has initiated a Phase I Pipeline study with our proprietary phorbol ester drug, RP-323. The study was carried out at the Cancer Institute of New Jersey under the direction of a leading oncologist, Roger Stair, MD.  Results of the early Phase I study indicated that RP-323 not only could reduce the tumor size but also induce phenotypic changes of the malignant cells in accordance with acceptable criteria of normal cellular parameters. These parameters include the synthesis of mitogen-activated protein kinase necessary for normal cell proliferation and differentiation.

In addition to the gene repair capability, there is another important desirable element of treatment with RP-323, i.e. tolerable side effects. In this study and those of earlier clinical trial in China, patients with side effects treated with RP-323 at the dosage range used included fevers, chills, dyspnea, hematuria and phlebitis.  Most importantly, these side effects were short term transient. Patients experienced no chronic side effects in repeated treatments.

With the above mentioned positive medical indicators of the efficacy of RP-323, PhorMed, Inc. has initiated a Phase II study toward the cure of Hodgkin’s Lymphoma.

How it works in HL

RP-323 is a phorbol ester that induces induction and differentiation and/or apoptosis in multiple cell lines. RP-323 has been demonstrated to modulate the growth, differentiation, survival, function and metabolism of other primary cells and cell lines. The broad range of these phorbol-mediated biological effects suggests a role for this drug in the modulation of a variety of cellular processes including those that affect the development, progression and therapy of human malignancies. It has been shown to activate protein kinase C (PKC) and modulates the activity of multiple downstream signaling pathways including mitogen activated protein kinase (MAPK) pathways. By inducing PKC it causes the formation of NF Kappa leading to the formation of NF Kappa B which has the ability to regulate cellular responses by entering the nucleus of the cell. NF-Kappa B binds to the DNA thereby inducing differentiation and proliferation, clearing the pathway along IL-7 and IL3 and possibly other pathways from stem cell (see figure 1); and cytokine induction, working at multiple points to clear pathways and boost immune responses (see figure 2), and/or apoptosis, the death of cells (see figure 3). 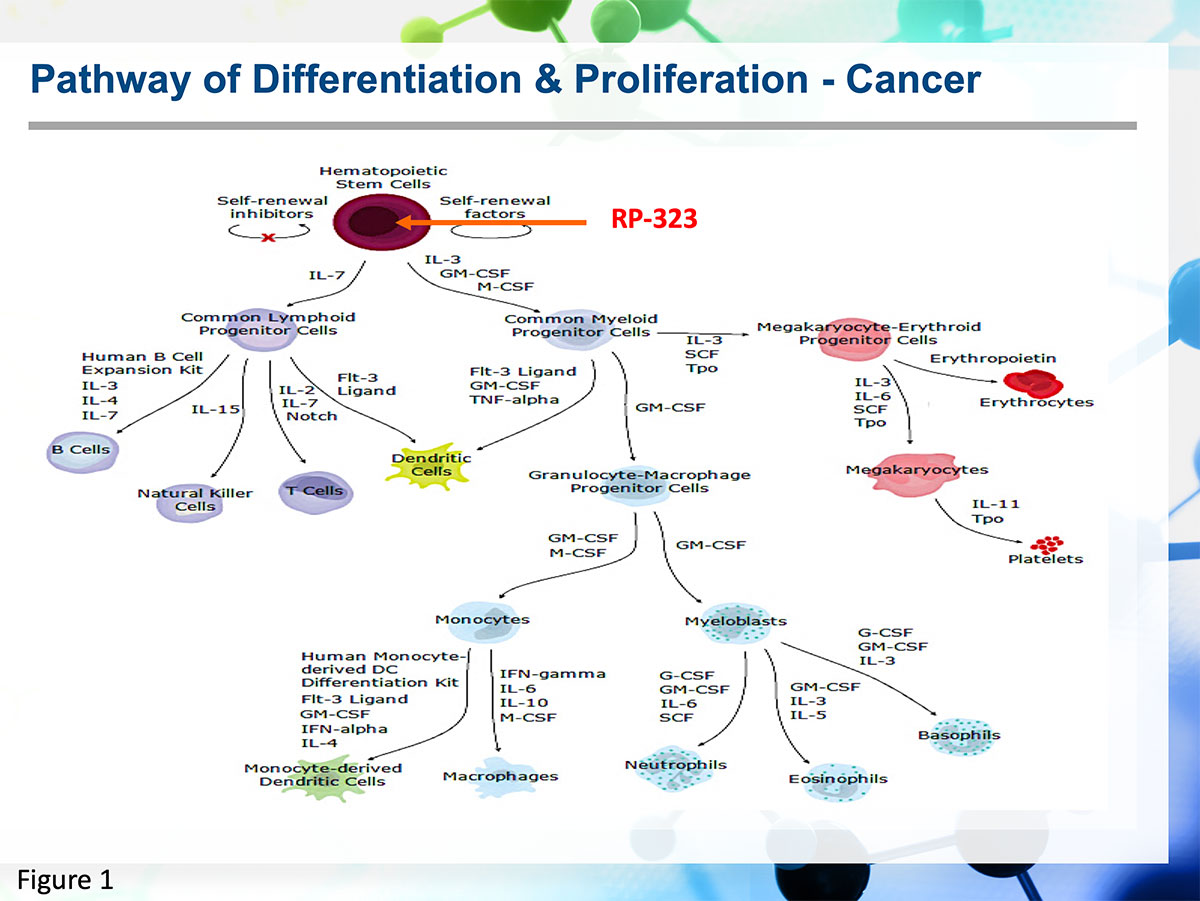